Today, I would like us to examine the impact of the current crisis on the emotions and behaviour of children.

Fear is undoubtedly the principal emotion experienced by individuals young and old alike. But can we confront a child’s fear by means of adult rationalisation? When young children wake up frightened because they have dreamt of some monster, they are not pacified when told that monsters do not exist. We need to help them discover a child’s way of combating fears. For instance, in an attempt to deal with the monster, a very young child places candy in his bed, hoping that the monster will eat the candy and not him. But when the following morning the candy is still intact, he may think that the monster avoids candy to protect its teeth, because, if they rot, it will not be able to eat people. In a subsequent attempt to deal with the monster, the child draws it on a piece of paper and asks his mother to turn it into a paper-boat. They then walk out into the garden and set it afloat on a rain puddle. The boat sinks and so does the monster, so the child is convinced that the monster has disappeared, which also makes him feel stronger because he was the one to destroy it.

A further emotion that we need to cope with is anger. We all know that anger should not be suppressed, so censorship is not advisable. Anger is best prevented. For example: The child comes home angry because a classmate told him that he was not wearing designer shoes. ‘Why are you angry?’ his mother tells him, ‘It’s true they’re not designer shoes. Do you think we should be angry when they tell us the truth?’ ‘Ok,’ the child replies, ‘but he said the same about my bag, I’ve had it since the year before last, it’s true, but it’s a posh brand.’ ‘So, if you know the truth, that your bag is posh, why get angry? After all, everybody knows that people confer value on objects. Objects cannot confer value on people.’

A behaviour we may observe in our child during this time is laziness, which in most cases has psychological roots. The child may feel that it is pointless to try. He finds difficulty frightening and easiness boring. The teacher in our example gives him two poems to choose from to recite at the national holiday. The one is long the other short. He is afraid of the hard one and bored with the easy one. In this case, we had better encourage him to learn the short one, but persuade him to recite it in such a way as to make it exciting. We have to teach our children to climb steps one by one, enjoying each stage; we need to show them that satisfaction is not synonymous with the top of the ladder, a top which may actually appear meaningless at ominous times.

Another issue we have to tackle is boundaries. With the collapse of ‘constants’ in our society, the boundaries we had set as a family may have faltered. Boundaries do not mean oppression, they mean freedom. An example to prove my point is the following: somebody swims in a sea where a shark is known to be lurking at a certain distance from the shore. No boundaries have been set so the swimmer is fearful and while he could venture to 300 metres he restricts himself to 20.

I suggest a democratic way of boundary setting. We sit at the table and ask the child what his daily schedule should be. We ask him to allocate time to study, play and TV viewing. Our aim is to elicit the proper answers and ratify our contract. We also ask him to pick a penalty for any infringement of the daily schedule he has compiled.
All the parents need to do is be consistent in upholding these boundaries.

The current crisis may give us the chance to realise that happiness lies within ourselves and we have to make that clear to our children. Let us see life as a painting and ourselves as the artists holding the brush. It is up to us to pick beautiful colours and cheerful shades, always trying to see hardship and error not as cumbersome disasters but as experiences teaching us how to become better people.

In these critical times we may discover the joy of giving, not necessarily money, but love, a smile, solace and support. It is also our chance to request the same things of our fellow men, if we need them, but in a dignified way.

It is undeniable that the crisis breeds strong emotions, which we can express through art and culture. Let us therefore encourage our children to communicate their feelings by painting, singing, dancing, writing poetry or organising theatre performances.

This crisis may also become a major turning point; a point of reassessing our values. We will discover, for instance, that ‘cunning characters’ are obtuse, short-sighted and parasitic. We will find out that we must regard society as a human body and here is an example illustrating this point. Imagine someone getting dressed for a hike; he is careful to wear sturdy shoes to protect his feet from thorny shrubs. Yet, all of a sudden, he decides to let one foot go unshod. Can this person advance, make headway? The same goes for our society, it cannot advance if we allow anyone to go barefoot, we should not tolerate discontent.

Let us pass on these messages to our children while they are still young. Let us cultivate such values in our schools. I believe that this is the safest way to reform our society.-
Αναρτήθηκε από Irene Kamaratou-Giallousi στις 2:03 PM No comments:

Email ThisBlogThis!Share to TwitterShare to FacebookShare to Pinterest
Ετικέτες english

View More By This Developer
Open iTunes to buy and download apps.

This app is designed for both iPhone and iPad
Rated 4+
Compatibility: Requires iOS 4.3 or later. Compatible with iPhone, iPod touch, and iPad. This app is optimized for iPhone 5. 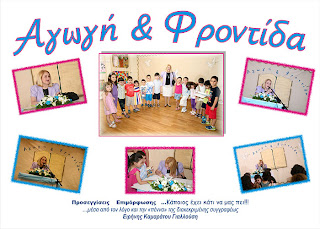